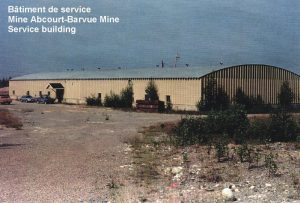 The Abcourt-Barvue property is conveniently located at Barraute, 60 kilometers (35 miles) north the mining community of Val-d’Or, Quebec. It covers 4,755 hectares with 103 claims and two (2) mining concessions held 100% by Abcourt.

In 1950, zinc was discovered on surface on the Barvue claims. The mine was operated from 1952 to 1957 with an open pit by Barvue Mines Limited and from 1985 to 1990 with an underground operation by Abcourt Mines.

From 2002 to 2007, several drilling programs, technical and environmental studies were completed or were done to provide data for a feasibility study and to support our applications for permits. Subsequently, various alternatives were considered to improve the profitability of this project.

In May 2006, a revision of the Abcourt-Barvue resources was completed by an independent qualified person, Mr. Jean-Pierre Bérubé, P.Eng., consultant for MRB & Associates of Val-d’Or, Québec, Canada. This revision was made according to NI 43-101 Standards.

Genivar, Limited Partnership of Quebec City and Bumigeme of Montréal, completed a feasibility study, which was published in February 2007 and amended in November 2010. With this feasibility study, almost all the resources were converted into proven and probable ore reserves.

Update of the feasibility study

An update of the feasibility study of 2007 was prepared by Mining Services PRB inc and Bumigene Inc over the last few months 2018, in a report complying with NI 43-101. This report was filed on Sedar on February 2019 (french only).

The 2018 mineral reserves estimate, including dilution, are presented in the following table in comparison with the 2007 estimate.

1)  Zn Eq grades are calculated with 2018 parameters for this table.

A mine plan was developed for the 2018 mineral reserves using the Genivar (now WSP Canada) 2007 pit design and underground mine design. The 2014 mineral resource diluted and recovered produced a total of 8,074,162 tonnes of mill feed grading 2.83% Zn and 51.79

Historical mineral recoveries during the Barvue production period were over 90% for zinc and 77% for silver. In 2017, metallurgical tests were performed in several laboratories. The cyclic flotation tests realized on the ore of Abcourt-Barvue have shown the possibility to recover 97.5% of the zinc and 77.8% of the silver in a Zn-Ag concentrate assaying 53.4% Zn and 740.6 g/tm Ag.

The processing plant remains at a mill capacity of 650,000 tonnes per year but the circuit was modified by eliminating the cyanidation circuits to produce only a zinc-silver concentrate.

Minor changes were brought to the surface infrastructure such as the installation of new 25kV power line on the site and the relocation of the waste rock stockpiles.

The analysis and results of the 2018 economic study are available in the report tabled in February 2019 (french only).

Send us a message